Zombie Capitol of The U.S.?

When I received an email from JetBlue warning me that my TrueBlue points were set to expire I knew I couldn't let that happen. I'd been saving those bad boys forever. I had to book a flight. I didn't want to mess up. As part of our "Tour the West Coast Before We Leave" plan, we knew we had to pick a location we'd never been to. It was a toss up - Seattle, WA or Portland, OR.

It was a tough call. Rain or rain. Hhhmm. We went with rain and Seattle it was. Once we made our decision, I figured I would call a reservations agent before I booked the flight to get conformation on the dates to make sure all was right. She assured me that all was a go. Keep that in mind. I'll get back to this later.*

We were pretty excited. In case you haven't guessed it by now, I feel best when I'm traveling. Home is on the road. I even sleep better when I'm traveling. It's always been like that. In a hotel, in a car - I sleep through the night when I'm not in my "normal" bed. As soon as I get back to my regular place of residence, I never have a good night's sleep. I couldn't wait to be in a new city.

When we arrived we had everything all mapped out. We knew exactly what we wanted to do and we knew we would do it all. From the moment we arrived we were in heaven thanks to my friend Sandrine. She steered us to the Hotel Max. All we needed to see was that there was a pillow menu. Every variety you can imagine. We were sold from the moment we stepped into our room.

We only had a few days so we knew we had to be on the move. First stop - the Space Needle. Now I'm usually not a big fan of spending a lot of money just to ride up, walk around, and ride down. But hey, this is the Space Needle. It's not like we're just going up and down an elevator ride for that price.

Besides, how can I say I went to Seattle and didn't go up in the Space Needle? Exactly. I couldn't. So I won't. Because I did. The views were pretty nice. It was only a little overcast. The rain was actually starting to clear up. *Gasp*. That's right, the sun was fighting for equal time. I may have even pulled out my sunglasses.

We headed back down and it was on to Pike's Market. This city is really the easiest city to figure out and I mean that as a compliment. The streets, the train, it's great for people that aren't used to cities. If you are a city person, it's a a great change of pace. Once we got to Pike's, I could have lived there. Okay, well, maybe not really, but no, I could have.

That place is great - the flowers, the fruits and veggies, the seafood. I've never seen things so inexpensive and of such quality. Of course that's probably the only place where you'll find things so inexpensive which is why I said I could live there. We couldn't leave without watching the fish being manhandled so we hung
around for a little bit. A little crab toss, mussel toss and fish toss and then we were good to go.

Then there was the great Starbucks debate. Which one holds the claim to fame of being the first. Is it the one on 1st & Pike's or is it the one in Pike Place Market? Apparently each one says they are but only one has the official stamp. We weren't taking any chances. We posed by both. Hey, we're coffee people, we needed that picture. 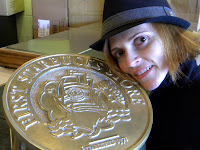 Next stop on the tour was the underground. We had been hearing about this for months and we were pretty excited about it. We pulled up to the tour location, got ready for the first segment and saw the children. The ones under five. The one in particular that was screaming through our orientation.

Now people, please let me make myself clear. We pay good money to go on tours. If you can not find someone to watch your children, please, please do not take them on a tour that lasts over one hour. That will be in dark, confined spaces that echo. That require silence so a tour guide can speak. Why do people do this? Also, please silence your cell phones and do not take that call and start talking while on our tour. 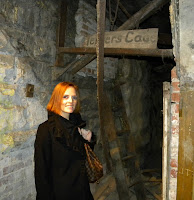 But back to the underground. It really is a fascinating place. Crazy to think people actually lived down there. We only walked a small portion of the city and once we were shown what the entry points looked like, every where we went after that we knew how extensive they actually were.

Of course, what would a dark, musty, "basement-like" place be, without a ghost or two. Supposedly there are a few hanging around some of the areas. They must have been hiding. We saw nothing. Felt nothing.

The most surprising thing of all was when we got out of the tour and came back up. The sun was shining. And so it was time. Time for the piece de resistance. The unexpected bonus to our trip. Who knew just by flipping open the magazine in our hotel we would have discovered gold of such amazing proportions. That's right my friends. I'm talking about.....ZomBCon 2011. 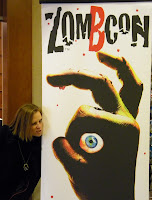 We could hardly contain our excitement. Are you kidding me? Zombies? In Seattle? What's going on here? The article said Seattle was the zombie capital of the United States. What luck! And this weekend. We happened to be in town for the weekend of a zombie convention. Holy Sh*t. We've hit the mother lode.

We knew we had to get there. We didn't care what it took. We would rearrange our schedule to make sure it happened. We found the train, hopped on and we were on our way. Once we arrived we couldn't contain ourselves. Literally. I tripped over a huge sign in the lobby, knocking it over and really made a grand entrance. I sure had arrived.

The cast of The Walking Dead was supposed to be they had a steep "sitting" fee. Plus, we were late comers, not advance ticket holders. My goal for the day was just to pose with a zombie. Eating me of course. There were quite a few "B" list actors there which for us zombie aficionados was pretty cool to see. Not cool enough to pay $50 to pose for a picture with though. I don't pay to pose. I have enough fun taking my own pictures, why would I pay someone for theirs?

If you'd like to check out the sites that we visited, go to the websites below:


For an alternate story and for different pictures go to my other blog at:
http://redismynaturalcolor.com/


*I want to thank customer service at JetBlue for giving me inaccurate information when they assured me that my flight dates would fall within the restrictions of my TrueBlue miles. They were incorrect and I lost off of my miles. When I called them on it they said it was my fault for not reading my rewards membership. After explaining that I did read them but got verification from a JetBlue rep that it was acceptable to fly on those dates I was told, "too bad, it's your fault". Thanks again JetBlue.