Ah, New York. It seemed like we'd been planning this move for a long time. Probably because we had. Are we moving, are we not, should we move? We couldn't decide.

We kept putting it off but we finally made our decision and picked a date. Late December. It sounded like a great idea. Christmas in New York. Everyone loves the holidays in the city. I know I do.

What's not to love? The decorations, the city all aglow, the shopping, Broadway, stores open late. Needless to say, I was pretty excited. Until I remembered one little thing. The cold. Damn it. THE COLD. I had forgotten about that part. We'd just finished packing. Was is too late to turn back now? Just a joke. No really, I'm joking.

We arrived in NY and to our surprise it was warm. A reprieve. Temporary, yes but it didn't matter. Anything to help us adjust would work. We knew what was coming. January. AND February. I might not make it after all.

Christmas was only a few days away. We had to unpack and put our things in place. Not an easy task when you have another house full of furniture to deal with. We had an easy solution. Set up outside. Nothing says welcome home like a couch in the driveway. My mom was amused. Dad, well, not so much. 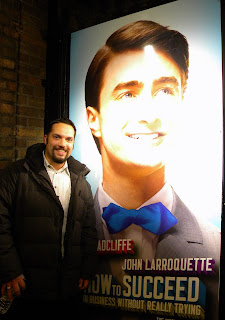 Work was almost done. Now it was time to play. Into Manhattan we go. We were on our way to see a show. I'm all about the shows. I've been going to Broadway since I was 3 years old. That's a long time. Tonight's selection - How to Succeed in Business Without Really Trying.

The play was fantastic. My parents had seen it and loved it which is why we decided to see it. I highly recommend it. Although be careful when you get wine in those plastic sippy cups. They leak.

Afterwards we decided to walk around. The best part about the city is that it's open late. Yes, the whole city. Ok, maybe not the whole city but most of it. This is what I missed the most. When trying to get coffee late at night only to face a closed establishment, many a conversation has ended with, "you know, if we were in NY..."

On the plane ride over I had just read an article in my New York Magazine about an art installation called "Rooftops". I thought it was interesting. Just a bunch of rooftops placed on the ground. I was wondering if I'd be able to see it. For years I had been clipping places to see, things to do but since I was in San Diego it had never happened.

Well what to you know. Walking around the corner on the way back from our play - Rooftops! Fences prohibited us from climbing all over them but it was pretty cool to see them displayed in the middle of block. After all these years, I finally got to see something that I read about in my magazine. This move was starting to look better and better.

It was turning out to be a perfect night. We'd only been back in NY for a few days and it was already magical. What a night this had turned out to be and it wasn't even over yet.

It was getting close to midnight, that's right, midnight, and the stores were still open. I knew I had to made one last stop. Cupcakes. Every night needs to end with a cupcake. Magnolia Bakery had my name on it. We strolled in and picked out a few chocolate creations and then our night was complete. Wait, that time thing is too good for me not to say it again. The bakery was open until midnight.


Yes, I know there are going to be good times and some not so good times. Like that January and February cold thing I mentioned earlier. Maybe I should have held off on the move until March when spring starts rolling in. But then I wouldn't have seen Rooftops or the Peep Mobile. Or Daniel Radcliffe in How to Succeed. And those are definitely some good times that I don't want to trade in. It's not too often you see a giant marshmallow bunny driving down the street. 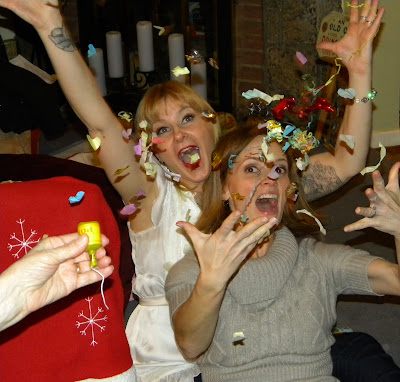 For an alternate ending and for different pictures go to my other blog at:
http://redismynaturalcolor.com/