Oh What a Mayo 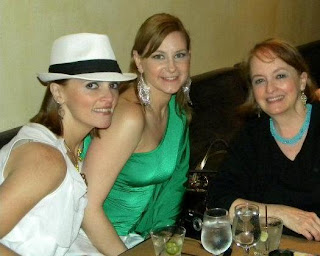 I'm not a big celebrator of Cinco De Mayo. I also don't celebrate St. Patrick's Day. Well, generally I don't. The "drinking holidays" are typically not my thing but something funny happened this year.

Funny ha ha? Oh no no. Funny ironic. Yes, I say ironic because that something was called Mom and Dad. Oh the irony.

It all started with the holiday of green. I hadn't planned on going out. I was still in my pajamas relaxing when my father asked if I wanted to head out with him and my crew.

I was taken aback. I didn't really want to go out but dad looked so....mischievous. That was all I needed. I'm all for a good night of mischief. I was in. I called the girls and we were set. Until dad bailed on me.

Yes, you read correctly. He bailed. Got me ready for the night and then he bailed on me. I was stuck. Plans were made. We proceeded - without dad. Beware when making plans with dad.

The months rolled along and May was here. This time it was mom's turn. She approached with her Cinco De Mayo plans. Tequila tasting, music, a new restaurant.

I was intrigued. I'm not big on Tequila but I'm always up for a new adventure. I was in. Mojave here we come. No, not the desert, the restaurant in Astoria, Queens.

We walked through the doors and the adventure began. The band was already playing as we arrived so we took our seats, sat back and grabbed the menu.

It was a latin evening and spicy was the tone of the night. Attitude and drink. My eye immediately flew to "jalapeno" and I was set.

Jalapeno infused tequila with a splash of lime was my drink of choice. Keep in mind I've stated that I'm not big on tequila. This drink was so good that I wanted more. I now know why Patti Stanger of the Millionaire Matchmaker fame has instated the two-drink maximum. 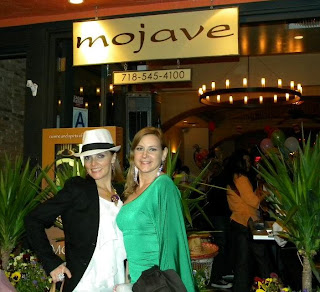 The food was good, dessert was great and of course those drinks were dangerously good. I was starting to think this celebrating mini holiday thing was a great idea after all.

Bonus - we couldn't leave without getting a dose of free - T-shirts, bottle openers, key chains and the most important of all....tasters of tequila.

After all, a night celebrating the remembrance of the 1862 Battle of  Puebla would not be complete without some tasters of tequila.

After spending a good portion of the evening at Mojave it was time to hit the town. I am not familiar with Astoria. This is where my dad grew up. He had plans.

We were back in his hood. He wanted to show us around his old stomping grounds. We're always up for adventure. And if we see some interesting finds along the way that's an added bonus. As long as the driver is always willing to stop the car, we're good to go.

First stop - the old apartment. We were like stealth bombers on a mission. Dad drove the car up the street and parked. We all ran up for our first picture. And then the door creaked open. Hhmmm.

We didn't see a no trespassing sign. It must have meant we were welcome. After all, dad used to live here. It's almost like he's a resident. No harm in a photo. We walked in.

Ah, the old apartment, straight ahead. I was tempted to knock and ask for a tour but I thought it was best to just get our "outside the apartment door" photo and call it a night.

Not quite. We weren't finished with our tour. Back into the car and around the streets we went. And down an alley. Mom was confused. An alley? Dad was amused. So were we.

He regaled us with childhood stories as we cruised down the alleys. Until we saw it. It was what made us stop the car. Not just a rolling stop. We needed the full stop here.  Yes, there, off to the side, was the cafe.

When you've had a rough day, when you need to relax from the stress of world, unwind in the privacy of your back-alley cafe. Have a glass of wine. Have a latte. Get away from it all.

I think I would have added a little palm tree. Create some green effect. A little serene privacy. Put some crawling ivy on that wall. Surrounded my cafe with nature.

Just remember, when you think you can't escape from it all, there's always a hidden place somewhere to lose yourself. Here it happens to be in an alley in the middle of it Astoria. This certainly was a Cinco De Mayo to remember.

Please visit my other websites at: