I love discovering new things. I also love walking around new (and old) neighborhoods. This is why New York is such an interesting place. Even in the winter, which I hate, there is always something going on.

Not that I'm always out discovering it. I've been a hermit for so long thanks to this brutal weather that I know I've missed out on so much. I do not like missing out on anything. But that's over now. It's spring. It's supposed to be warm. Which means me, outside, exploring.

My latest explorations have taken me from Manhattan to Brooklyn and back again. While I say explorations, some might say obsessions. I've mentioned it before and it definitely warrants multiple mentions. The Macaron.

Ah, the Macaron. Such perfection. I first became smitten with this little orb of perfection on one of my trips to Paris. Of course the perfect city would have the perfect treat. I was in love. I wanted more. I always needed more.

Then I began following a vegan diet. I thought it was the end of my pillows of perfection. Until I discovered Sweet Maresa's. It was an accidental find at my first vegan pop-up shop a few months ago. I began following where they would go next.

This is how we wound up in Bushwick, Brooklyn at the Pine Box Rock Shop. Our mission was quick - get in, get the goods, get out. I was pretty good that day, unusual for me. I'm weak, I admit. But our adventures always start from one idea and morph into another.


We left the Rock Shop and walked into a tour group. Odd. We didn't think there was anything around here to tour. That's when we noticed our surroundings. It wasn't just any tour - it was an Art Tour. That's when we saw them. All over most of the buildings. Grattan Street, Morgan Avenue, Knickerbocker Ave - Wall Art. We could have driven around all day just looking at Art. But we had more to discover.

Our next adventure took us to Manhattan. We're always guaranteed to find something interesting in the park and what a find! Spools and spools of rope. Thanks to the Public Art Fund we found "Desire Lines" by Tatiana Trouve. On display March 3 though August 30, 2015.

Each spool is wound with rope equivalent in length to a corresponding pathway and is labeled to identify its location in the park. There are 212 spools and each pathway has a title drawn from culture. Seeing giant spools at the entrance to the park was definitely something that was going to get our attention.

Of course I found the spool that referenced Paris. What else would go with the macarons?

We had night plans so it was home for a quick change and back out for Broadway time. What goes better with the theme of macarons & Paris better? Why none other than....An American in Paris!

This was one show I couldn't miss and I wasn't disappointed. The lead danced like Gene Kelly and just thinking about being in Paris was enough to keep a smile on my face the entire time. The dancing was mostly balletic so if you enjoy dancing this is a great show, or if you just enjoy Broadway in general it's a great show. 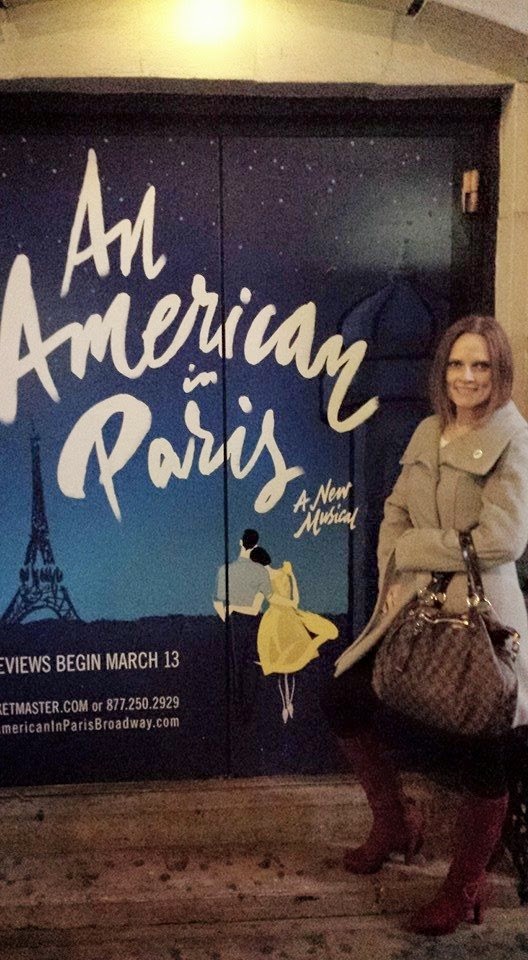 We weren't ready to head home so we went across the street to the Maple, a place we scouted earlier in the night. Paris was still in the air and I went with it.

The French Cocktail. St~Germain. Perfect. Gin, muddled mint, lemon juice, simple syrup, topped with Proseco. I controlled myself and stopped at one. Only because I knew the last bus was coming or else who knows what would have happened.....

Before I knew it another week had gone by and it was time for new discoveries. New discoveries and old favorites. By this I mean Macaron time. In a new location. We had run out. I couldn't have that. I wasn't alone in my desires for puffs of heaven though. Mike was in on my quest.

I did some research. The next vegan pop-up shop was at Moo Shoes. Uh oh. This looked like trouble. In my quest for macarons I was being sent to a shoe store. This couldn't be good.

It wasn't. I mean, yes it was good. It was beyond good. IT WAS AMAZING. There were macarons and chocolate and those delicious Yeah Dawgs, and shoes, shoes, SHOES!

I didn't know where to go first. But then I saw it. Tiny pillows in every color. I ran. Well, walked fast. I wasn't the only one excited. There was almost a fight on that macaron line. Apparently this woman didn't get the "no cutting" memo. I would have thrown her down but the mood around me was all zen and shit. I couldn't let it get to me. I was seconds away from more bites of Heaven. 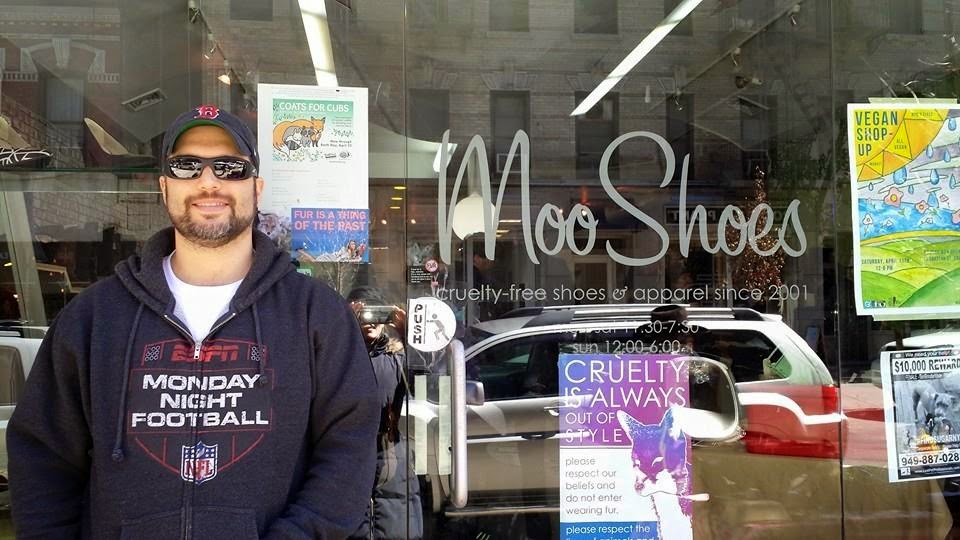 Besides, I used my line time to scout for shoes. Of course I found a pair. Cute little mauve flats with a bow. It was a successful mission. The best part was Moo Shoes is just around the corner from BabyCakes. Baked doughnuts, savory biscuits and chocolate dipped Madeleines - yes, it was a very successful day.

For more information on the places I've mentioned, please visit their websites: