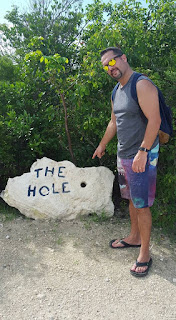 Ah, the Hole. It really just came out of nowhere. Well, TripAdvisor actually. It sort of just popped up on the screen when I was looking at places to visit. Almost like a sign. --->Go Here<

It all started when Mike and I tossed out the idea of going to Turks & Caicos. We weren't sure we'd be able to go but then we won travel tickets as the top fundraisers for the charity we work with and planning soon begun. 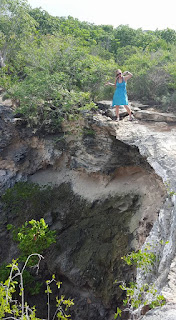 On TripAdvisor, the Hole was described like this, "get ready to go to the "Hole" located in Long Bay in Providenciales. This naturally formed massive limestone 40 foot hole is on the list of things to see. People can be lowered down a rope where 80 feet down there is a swimming hole. For adventurous souls only!".

I was intrigued. When I thought of vacations, dream spots, beaches and what to do while there, visiting something called The Hole wasn't something that was at the top of my list. But I like adventure. I was in.

Although I'm not a big fan of tours. I've always felt that I can do a better job of seeing an area on my own. I generally have two schools of thought on my travel - wing it (I'm a big fan of this and can honestly say it's been a great ride every time) and research. As I've gotten older, I've turned more to research. Not because it's necessarily the better way but because I don't want to miss anything.

So TripAdvisor has come in very handy and has given us some great options. We don't always have to use them but we've gotten some great tips and suggestions. We got to Turks, and our very amazing TripAdvisor-suggested hotel, and were set to explore.

We looked at the tour books in our room and they also suggested a tour. For $$$. Whatever. We're our own tour guides. We mapped out a route, grabbed our bags, packed water and snacks and hit the road. Not a bad hike but not too close either. We walked about 2 miles to get there. We were excited. The sites and the books had talked this place up. I couldn't wait to see this swimming hole.

Just in case you weren't sure you were in the right spot, the large rock with a hole in it that stated "The Hole" was a good indication that yes, this is it.

There wasn't a soul around. Not a sound either. I'm not exaggerating. We started to wonder if this was a joke. Could all of the guide books AND TripAdvisor have been wrong? Could this really be one of the hot spots to see?

We were here and we weren't going to leave without seeing what it was all about. We walked down the gravel path, through some shrubs and there it was. Or wasn't. Sure, there was a hole. Could you climb down? Probably. Would you want to? No. Swim in it? Absolutely not.

I went close enough to the edge to peer down into this wondrous abyss. From what I read, I pictured rappelling down the sides into a pool of crystal blue waters. Nope and nope. Before stepping up to the edge, it looked like an interesting cliff with mysteries inside. I wanted to go.

My head popped over the edge and I saw.....brown water. Brown water? Not in the Hole. And garbage? There's garbage down in the Hole? Say it isn't so!  Is nothing sacred? Ah, poor Hole.

There you have it. The saga of getting to the Hole. Was it worth it? Of course it was. If we didn't go, we'd still wonder what it was all about. Like always, it was an adventure - we had fun getting there and we were able to explore more of the island.

And that sign. We wouldn't have seen that fabulous warning sign. Most of all, we were happy that we saved money (more for shopping!) and did it on our own.