The Munchkin has a Birthday 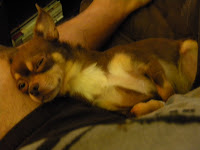 Like all good parents we were excited for our baby's first birthday. Well, at least his first birthday with us. Our little Charlie Brown was turning four. We couldn't just let this day go by like any ordinary day. Mike gets cake on his birthday. And presents. Yes, we can't forget the presents.

So why shouldn't our little tyke get the same treatment? (This is a rhetorical question people). It started out innocent enough. We weren't thinking of going so big. We thought maybe just a quiet little celebration, just us and our little guy, maybe an extra treat. Sure, that sounded like a nice idea. Perhaps I got a little carried away. All I did was add his name to the invite. Give him equal top billing. He is Charlie Brown after all. He deserves it. 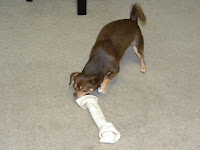 Here's how it went down. Every year we have a big Christmas Birthday Party. We call it the "Annual Jeffries Ranch Christmas Parade & Mike's Birthday Party" Party. I know, great title. We're thinking of trademarking. Our neighborhood hosts a holiday parade every year. It's fabulous. Really. So fabulous we work our party around it. If the date changes, so does our party.

All of the boats and old cars will get decorated and form a procession and drive around with music - helloooo parade - sometimes even the Marines participate, tanks and all. It's to benefit Toys for Tots. This year we added the "& Charlie" to the end of the birthday portion. We thought hey, it's time he's celebrated as the awesomeness of cuddly brown fur that he is. Apparently we aren't the only ones that feel this way. 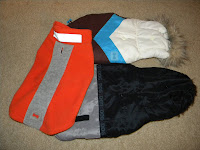 I was hoping to skip the present opening. I never liked this part. It's always an awkward moment of any party but all of a sudden one friend brought a bag to Mike and said, "This is for Charlie, you have to open it". The next thing we knew the presents were flying. All for Charlie. Hey, I think we're on to something.

Bag after bag they kept coming. Charlie was a very popular little fellow. He didn't know what to make of all this. He just kept running back and forth, nose in bag. He smelled something. We opened the first bag and out came some stylin' new clothes. I was pretty excited about that one. A guy has to keep up with the times you know and besides, it does get cold. This, however, was not what Charlie was searching for. And then, there it was. At the bottom of the bag. The mother lode. 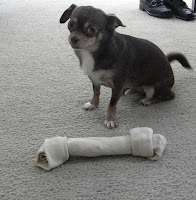 The BONE. Mike reached in and pulled it out. Charlie did a happy dance. We put the giant monster in front of our 10 pound munchkin and watched as he opened his tiny mouth and proceeded to grab the massive behemoth between his teeth. He walked away a little top heavy but determined to take his new toy. The crowd erupted in laughter.

The bone giver admitted that he wanted to give a bigger one. He thinks it's funny. We've had to deal with the fallout. That face. It says I want that but I can't have it. We've had to unwrap the ends so that our little guy can attempt a chew. It's semi-working. It's a good thing he had his little birthday cake to distract him. Apple carrot with peanut butter frosting. It was all natural. Not bad. Yeah, I tasted it. Don't judge.
Posted by Melissa K Bauer at 9:46 AM