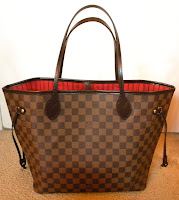 I have a boyfriend. His name is Louis. I've had him for a very long time. Way before I met Mike. He's very special to me, not one of those guys that you can give up just because you get married. I'm pretty sure Mike understood this when he met me. I mean, come on. You can't expect a girl to get rid of her relationship with someone, one that has extended back for so many years, just like that. And I'm talking years.

I first met Louis when I was just a little girl. I can't remember where we met. Perhaps it was a magazine. Perhaps it was in a store window. All I know is that from the moment I first laid eyes on his beautiful brown skin I was in love. I think it was the steamer trunk. Yes, the steamer trunk pulled me in. I had visions of the Grand Tour. Europe. Wheeling my steamer trunk with the little LV's intertwined throughout. Oh, Louis what have you done to me..... 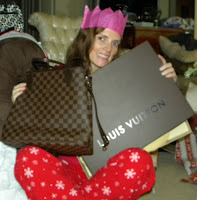 Throughout the years I kept tabs on Louis. When I would make him mine. There were so many different ones to choose from. What's a girl to do? I remember going to get my first one. I spotted the little guy and knew I had to make him mine. It was the cutest thing I had ever seen.

The mini speedy. Tiny. Adorable. I could still fit all the essentials in there. Phone, license, money, tissues, lipstick, car keys. Perfect. I will make him mine. And so I did. My mom was with me for my first Louis. You never forget your first. Or your second. Or your third. Well, okay, so you get the point. You never forget any of your Louis's. He's pretty much an unforgettable guy. 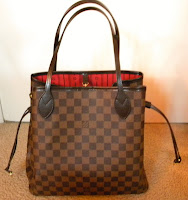 It had been a few years since Louis had made a visit to my house. I missed my old boyfriend. Mike now understood that I needed to keep this relationship alive. He was okay with it. There are some things that a husband needs to understand and this was one of them. He saw how I would longingly pass my Louis at the mall with sadness in my eyes. How I would lovingly caress my baby at the boutique and tell him that it would be all right, he would come home to me soon.

I didn't know when but I had to tell Louis something to make him feel better. It's cold and lonely in the store, any words of comfort were better than nothing. And then it happened. Dear God I don't know how but it happened. New York Santa and California Santa got together and delivered my Louis to me. It was a Christmas miracle! All is right with the world. Louis is back with me and I can once again walk down the street with my man on my arm. Oh, and Mike too.
Posted by Melissa K Bauer at 8:45 AM