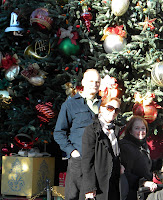 For the holidays this year instead of going to NYC to see my parents, we thought it would be nice if they came to see us. It would be warmer, more relaxed, more fun. You see where I'm going with this. We had great arguments going for why they should come to San Diego. It worked because this year it was a Southern Californian Christmas. Which, ironically, was our backup plan.

It was originally supposed to be a Hawaiian Christmas. Meleke liki maka and all that good stuff. This would have guaranteed us a warm holiday. Alas, Maui wasn't meant to be. Sigh. But hey, this is Southern California. It's always warm, right? Always sunny, right? I said right? 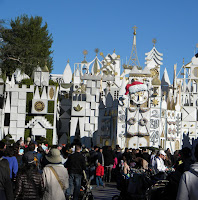 But really, it didn't matter where we were. We could have fun anywhere. That's just how we roll. As a special holiday treat we thought, hey, let's take the parents to Disneyland. We decided to get the park hopper pass. Two parks in one day. California Adventure is just across the "street" so why not. We had the brilliant idea of going on Christmas Day. Apparently so did 85,000 other people. Literally. We never made it.

We lounged in our pajamas opening presents on Christmas morning, thinking about how nice it was to be lazy and dreaming about our brunch of German pancakes. Then the phone rang. It was our friend. He was already at Disneyland. He wasn't being lazy. The park was too full. No more people would be allowed in. Oops. Guess we'll have to try again.

We set our sights on Wednesday. But wait! Rain. The one day where we have a virtual flood. Really? Thursday it is. We made it to the park and yes, so did the other 85,000 people. They say this is the happiest place on earth. I'm wondering who dubbed it that. Probably the bankers. That's got to be a pretty fat profit coming in. 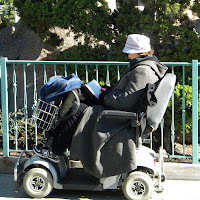 Don't get me wrong. We had a great time. The rides that allowed us to waltz on up to the front with the wheelchair were my absolute favorite. Thanks Mom. But those lines. Is it possible to be happy waiting in line for over an hour?

Ok, over at California Adventure, I will admit that the Hollywood Tower of Terror was worth the 60 minute wait but the same can't be said for the Matterhorn. That ride only lasted 30 seconds. 30 seconds. Besides, there's a technicality here - California Adventure doesn't fall into the happiest place on earth category as it's not part of Disneyland so it's disqualified. 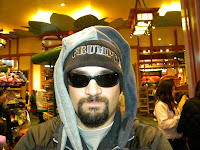 We needed a little pick me up after all that waiting in line. What better way to put a smile on your face than hat time. Of course nothing says it better than Grumpy. After we all took our turn trying on all the hats, and yes, I mean all, we were renewed and once again hit the streets. We bundled back up - hat, check. Scarf, check. Coat, check. Ah, it's a beautiful warm Southern California day. 55 degrees. Okay at least it's sunny.

As we were moving along, or zipping along with Speedy Mags, we realized how clueless people are. They walk right into you. Apparently they don't see a giant scooter, complete with horn and light, coming right at you. People walked sideways, diagonal and even head on right into Speedy Mags.

I finally told her to just run them over. She's the one with the wheels, if they can't get out of the way, they must suffer. Oh the beauty of it all. She listened to me. Sweet lovin', Speedy Mags listened and she ran them all over. I changed my mind. By God this is the Happiest Place on Earth.