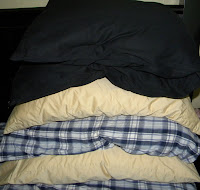 I've heard that you don't really know a person until you've been with them for a long time. After a few years, certain little things come out that you may not have noticed before. You hear things like this and think, sure, maybe other people but not me. At least you think you did. When I first met Mike, I thought I knew him. He seemed so nice, so quiet, so giving. He was the type of guy that would share everything with me. Everything. Or so I thought.

I guess in the beginning there are certain things that on the surface appear to be one thing but when you look deeper there is an evil lurking, something so sinister, something so calculating that when you least expect it, it will attack you in your very home. I should know. It happened to me a few nights ago. 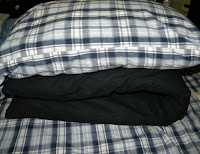 I should have seen it coming. The signs were there. Years ago, my Aunt & Uncle had given me a gift card and I decided to splurge. Going for the big guns, I went with the $50 pillow. Looking back, I smile at my naivete. I thought I had bought myself a nice gift. The operative word here being myself. As soon as I walked in the door and Mike saw my luxurious fluffiness he pounced. He said that it was nice that I got us a pillow. Us. I didn't miss his word usage.

I pointed out that it was mine. He corrected me. Ours. We could share. I had my pillow for one week. I never saw it again. Throughout the years I tried bringing in new pillows for myself. Silly me. Mike would take notice, stroke the new fluff and take it for a test run. I knew it wouldn't be long before it was gone. I'd even thought I learned a few tricks over the years. Knowing that Mike would always want my new pillow, I would get him a new pillow. Eventually, all the pillows would somehow, "magically" make their way to his side of the bed. Amazing how that works. 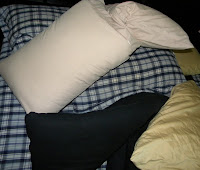 But this is where it reached a full cataclysmic, disaster-filled, pillowtastrophe. I'm talking full on World War III. It started out just like any other night. We were getting ready for bed, nestling under the covers, fluffing the pillows. We each have a body pillow which amazingly enough mine has managed to avoid the pitfalls of all the previous pillows that have come before it-it is still mine and only mine.

Currently I only have one main pillow. Somewhere along the way I lost my other one. Yeah, lost it to Mike that is, when I lent it to him and he sucked it into the vortex of Mike pillowdom. Mike has three. I decided I wanted my loaner back. This meant we were even. Two each. I don't know what I was thinking. It started with Mike's head inching closer to me, or rather to my pillow, then closer, then I got, "Hey, this is my pillow". It ended with a pillow tug-of-war. Then a throw. It was ugly. 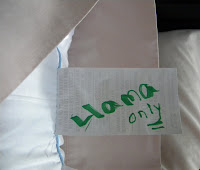 Apparently, when you lend a pillow out, there is a statute of limitations. Against the lender. After 30 days, it's no longer yours. This is what I was informed of. I decided I wasn't playing nice anymore. No more one for me, one for you. I made a stop at Kohl's. TWO for me. That's right. I got two pillows. Giant, fluffy behemoths. Mike fought me as I walked them down the hall. He tried to get them. He told me it didn't matter what I said, ALL the pillows were his. He's wrong.

This time I labeled them. That's right. I took a green marker to those babies. Property of me. You'll notice the label says Llama only. That would be me. Llama you ask? Another time, another story. I got out of bed this morning and heard Mike talking. I came back into the room to hear him say this: Oh, this pillow is niiiice. Yes, he was on my side of the bed, rolling all over my new baby. I know it's not over. The Pillow Revolution will never end.
Posted by Melissa K Bauer at 7:19 AM