Do you every wonder why there are some people that seem to have all the luck? No matter what they do in life, things always go their way. From birth through childhood through teen years to adulthood, they seem to have it all. Sure, they may have the occasional hiccup and there may even be a point in their life where they do have a rough patch but overall the world seems to fall at their feet.

Then you have the others. Not much seems to go right for them. They try, do what they think is right and yet, no matter what, they can't seem to catch a break. It always seems like no matter which way they go there's a big pile of merde waiting for them to step in. It's tough cleaning that stuff off your shoes. I know. My shoes are covered in it.

They say you have to pay for your past. First of all, who the hell are "they" and why do we have to pay for someone else's past? We're in the present, in the here and now. It's bad enough I have no luck in this life - why am I paying for someone else's poor judgement? Wait a minute. Karma. You always hear talk of Karma. How you'll get what's coming to you. I never worried about this before. But now, hhhmm. Makes me wonder.

I used to have this game when I was a teenager called Past Lives. We loved that game. It was hysterical. I think it was funnier for my friends than it was for me. Why? Because I was Fatty Arbuckle every time we played. I'm talking every time. The irony is not lost on me. 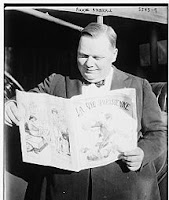 What makes this even more ironic is since these teen years, everywhere I go people seem to be obsessed with my weight, whether big or little doesn't seem to matter. But that's another story. Have you read about Fatty Arbuckle's life? Probably not. I don't see why you would. You weren't him in a previous life like me.

He was initally charged with the murder of a young starlet. While he was found innocent, the public never viewed him the same and his Hollywood career was ruined. Interesting story. If you'd like to read more go to: http://www.callmefatty.com/. Was he guilty? No one will ever know. But I must be paying for something......

So as the golden children settle back and enjoy life in luxury as one amazing day unfolds after the next, those of us merde steppers are perched to await whatever wondrous event will befall us. Let's just hope that board game wasn't giving me a glimpse into the future. It didn't go so well for Fatty.
Posted by Melissa K Bauer at 7:59 PM