I am not a big fan of summer. Of all the seasons, it ties with winter as my least favorite. Ok, maybe that's not completely true. Maybe winter slightly edges summer out as my least favorite but then again maybe not. In case you haven't already guessed it I don't like extreme weather. Don't like it hot. Don't like it cold. It's currently summer. And hot. So at the moment summer wins that title. I wouldn't even say it's a love/hate relationship. It's more of a like/tolerate relationship.

Sure, I like everything that summer brings - barbecues, swimming, warm sun - but did I mention the heat? There was never really anything that got me so over-the-top excited about summer that I couldn't wait for it to be here. Well, of course with the exception of my birthday on August 13th but that's just a given. That was already a previously known holiday and was celebrated throughout the land. For those of you who are just learning this fact, you may now proceed with the festivities as you like.

Every year, there is something that I look forward to. We've already established it's something besides my holiday, er, I mean my birthday. As the months get closer to August, I get excited. I count down the days with eager anticipation. Like a little kid at Christmas, the excitement builds. I know it's August when I see those fins swimming across the T.V. That's right.....it's Shark Week.

Shark week is currently upon us. Night after night, Mike and I sit on the couch to see what kind of education the Discovery Channel will give us. One of the first programs we watched was called "Summer of the Shark". It was interesting. Experts were trying to explain why there was an increase in shark attacks. I have my own take on the attacks but first I'll give you the expert opinion.

There was a change of weather patterns - warm water currents pushed cold water currents - which increased the number of great white sharks in the area (off the coast of Australia). They were juvenile sharks, or as I like to call them, "teenagers". Yeah, you know what I'm talking about. The juveniles don't have parents to guide them and as many animals do, they take test bites to see if something is edible. They were learning how to hunt. Great whites generally take a test bite and spit out. Unfortunately humans sometimes can't spare a piece, even just a taster. It's the other sharks you have to worry about. Those damn Tigers and Bulls. Those bad boys don't just want the sampler platter. So the increase attacks came down to lower water temperature which brought more sharks and they were learning how to hunt for new prey.

Here's my theory. Revenge. Plain and simple. The sharks have had enough. It's bad enough that years of over fishing have depleted their food source but now they are being ripped out of the ocean for some lousy shark fin soup. What's up with that? Cut off the fin, throw the shark back in the water and leave it to die? Of course they're pissed. I'd be pissed too. I'd be on the hunt. If people can hunt them down than really, what's so wrong with a shark hunting down a person? After all, the ocean is their domain. It's not like they're running out on land, shooting a man and running back into the water.

It's amazing how people get so angry when a shark attacks a person and they want to kill all the sharks. Aren't you were swimming in their domain. Why do people think they are entitled to everything - land, sea, air? If something gets in their way then they need to be taken out? I say go for it shark. I'm not getting in their way. Yes, I respect them. Yes, I would love to go cage diving with the great whites. Notice, I said cage diving. With use of cage. I'm not just jumping in the water, swimming freely, oblivious of my surroundings. I've always had an overactive mind. Many of you might refer to this as one of a paranoid or delusional variety. Say what you will. It will save me from being eaten. Crocodiles in the lakes, piranhas and giant sharks in the or oceans, you name it I can imagine it.

I also never go in the water alone. Safety in numbers my friends, safety in numbers. I also recognize that I'm getting into their ocean. If something were to happen is it the shark's fault? Not so much. Now if the shark came into my house that would be a different story. And incredibly interesting as well. 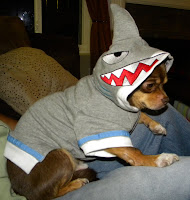 In honor of Shark Week, we thought we would let Charlie Brown join in the festivities. This is a little something we like to call Chaws. The way this little guy has been eating lately he can most definitely be compared to the Great White.

For an alternate ending and for different pictures, go to my other blog athttp://www.redismynaturalcolor.wordpress.com/
Posted by Melissa K Bauer at 9:14 AM