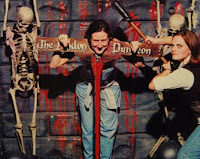 I have always been fascinated with all things scary. Some might even say obsessed. I don't know why, I don't even know when or how it started but for as long as I can remember I have always enjoyed anything related to all things scary. Books, movies, rides, games, I'll take it all. I'll try it all. It's ironic really. My mom is terrified of anything scary. Definitely not her first choice. I don't know where I got it from. I'm telling you, an obsession.

I remember going to the library and picking up my first Dean Koontz book. It was called Darkfall. Great book. I couldn't wait to finish it. Until my mom saw me reading it and took it away. Said I was too young. What?? Nine is definitely not too young. Do you know how hard it is to finish reading a book when you have to sneak read chapters every time you go to the library and do covert ops? Leave your mom and brother in the kid section while you run to the adult section looking for Dean Koontz? Not an easy task. Same thing happened when I tried reading The Exorcist when I was eleven. Confiscated. This time by a teacher. What's with this censorship? I even had to sneak my movies in. A classic like Poltergeist. Imagine that. I had to wait until the parents were out before I could catch up on my horror classics. What's a girl to do? Thank goodness for Nana and the babysitter. Whew. 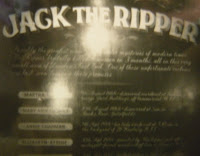 My friends can attest that it's been like this forever. They've all been sucked into my world of ghosts and horror movies. Yes, we've all watched great movies and cheesy movies. Those are the best ones of course. I'm not ashamed to admit it. They might be but I'm not. Classics. That's what I'll call them. As I got older I discovered the mother lode. All over the world. This was brilliant. Everywhere you went you could be entertained and learn. Yes, that's right, it was a history lesson. Sure, that's what it was. I was learning all about the history of where I was. That's my story and I'm sticking to it. Ghost tours and museums and much, much more. Now these were definitely the kinds of museums I could visit all day long.

Throughout the years I've been on a few ghost tours and a few interesting "horror" tours as well. Whether or not they are scary I guess is up to the individual but you definitely learn some cool facts and depending on who is in your group you can be entertained. I'm pretty lucky. I always have a good group with me. It's always me and whoever I take. So yes, that's a good group. We know how to entertain ourselves, no matter where we are.

First stop - London Dungeon on Tooley Street. It looked like Sarah need a little head chopping. I was up for the task. This place was fascinating. It told 1000 years of London's most dark and gory history. There are different rooms that tell the tales of what went on throughout history and most of it is in the dark. The anticipation of what you think is going to happen is probably what is the most scary. We loved it. Of course you can't leave London without going on a Jack the Ripper Tour. Also a night tour, which you'll find is the best for a ghost tour. Trial and error, my friends. I remember a lot of walking down cobblestone streets for this one. Sure, not as scary as a traditional ghost tour might be but still a pretty interesting walk when you try to think of walking down the same paths as others did so long ago.

By far one of the coolest ghost tours I have ever gone on was in Edinburgh, Scotland. I was flying solo for this little bad boy. Walking around the old streets of this beautiful city was amazing and to cap it off with a visit to the underground haunted vaults was fascinating. You would never think while you are walking around above ground that there is a complete city underneath you. These vaults have been featured on T.V. as being the most actively haunted and paranormal experiencing locations in the world.

Much like in London, you learn about the historical dark side of Edinburgh. I think it's time I go back for another tour. I see they've added some new things. At the end of the tour they now take you to Scotland's most haunted pub for a drink, The Banshee Labyrinth. Wait a minute. Look at all this history. This is actually a very educational fascination. Learning and getting entertained at the same time. Really, what more could you ask for?

Now it was time for us to hit up San Diego. We'd done a brief tour on our own before. The Whaley House in Old Town. The Chamber of Commerce had dubbed it the most haunted house in America. Now that's a pretty good title. However, we had made a mistake. Day time. I know I mentioned that earlier. Never take a day tour of a haunted location.

Now I'm not saying you're guaranteed to see anything at night but hey, it's more fun. Plus, there aren't children running up and down the stairs going "wooooooooo I'm a ghost". This does not make for a good atmosphere. I do actually recommend going to The Whaley House. I'd like to go back at night. It was interesting. But this time we decided to take a walking tour of the Gaslamp District in downtown San Diego. San Diego is perhaps known as the most haunted city in the United States. We started off at the Georges V Hotel on Fifth Street which was once owned by Wyatt Earp, but not haunted by him.

This is haunted by former women of ill repute. Well what to you know because we also found out that the Gaslamp used to be the red light district. I love history. We had fun running up and down the stairs at this location and it's a good thing we did because unfortunately many of the buildings that we were shown we could not enter. One, which used to be a mortuary and was very haunted, was now a private jazz club. So private that there was no phone number and had a fake law office door to fool people into thinking it was something else. Really? Also on Fifth Street. It costs $300 to get into. I'd rather be a ghost. Another building that we couldn't enter was a restaurant. The owners believed it was not good to mess with spirits. What the hell is going on here?

Our last stop on the tour was the Horton Grand Hotel. It was actually two hotels split by a lobby. This place was haunted by two ghosts. The Horton Grand was graced by the ghost of Ida Bailey. She preferred showing herself to the men and didn't appear to women. Sure, I can understand that. Which is why I gave up Mike as a sacrifice. Our tour guide said she was fond of money. Well, duh, who isn't? Mike pulled out that cash and sat on the stairs. I didn't want to leave him out there too long so I just made him pose for a few pictures and I let him come back down.

The other side of the hotel is called the Kale Saddlery and is haunted by Roger Whittaker, who was a gambler. He haunts room 309. Of course we were told that we couldn't go up here either because it was occupied. Well of course it's occupied. There's a ghost in it. Apparently if you want to see ghosts you have to make a reservation to stay at the hotel for which there is a three year waiting list. For room 309 anyway. Looks like I'm going to have to find my ghosts somewhere else. I wonder if the tour group is in cahoots with the merchants around San Diego. Apparently the only way to get inside these buildings now is if you pay. Or if you're a ghost.

For an alternate ending and for different pictures, go to my other blog at:
http://www.redismynaturalcolor.wordpress.com/