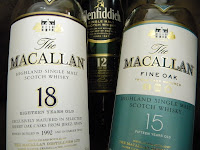 The other night Mike decided to have a Scotch tasting. He was super excited. Wait, let me re-iterate with feeling. He was super excited. Me? Not so much. It's not that I minded having people over. That part I liked. But scotch? Have I mentioned that I'm not a fan of scotch? No? Well, let me start by saying that drinking scotch is kind of like sucking on a band-aid. I know, you're probably asking yourself if I've ever actually sucked on a band-aid.

Well, no. But I know you'll know what I'm talking about. The smell. Take a whiff. Taste and smell are intertwined. We all know it. It's like wine. When you go wine tasting you'll smell that glass and say hhmmm, hints of pepper and then you taste and BAM. You can taste the pepper. It's the same theory. You stick your nose in the scotch glass, take a whiff and ah, band-aid. Take a sip and it's like you stuck a band-aid in your mouth and started sucking away. Let me give you a brief history on me and scotch. We go way back. 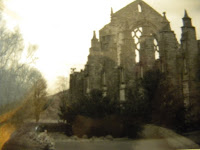 Like many people, I am a mutt. I have many different backgrounds. Spanish, Cuban, French, German, Polish and Scottish. I'm not ashamed to admit that I favor some of these heritages over the other. For those of you that know me, you know that I'm way more biased in the French section. I don't know why. I've always been obsessed with France. Nothing personal, it's just the way it happened.

However, my goal has always been to visit all of the countries that are part of me. Yes, even Poland. I'm halfway there. France, Scotland & Germany. Check, check & check. It's not my fault that I keep returning to my favorite. Spain was next on the list but life got in the way & I haven't been able to make it. Cuba is high up there but, well, you know how that goes. Someday. Even though I kept returning to France, I will admit I loved Scotland. Everything about it. Well, almost everything.

When I got to Edinburgh I was fascinated by everything I saw. The churches, the bed and breakfasts, the buildings, the castles - it was all so picturesque. I took my time strolling everywhere. I didn't care if it was misting or sunny, I strolled along the streets and took pictures of everything. The best part were the bagpipes. They had bagpipers playing in the squares just like we had musicians playing in the subway in NYC only this sounded so much nicer. I would sit on a bench and listen for what seemed like hours. It was so peaceful and relaxing. There was even a scotch factory.

Now I thought this was pretty cool. Take a tour, get a free drink. Nice. I thought I would take the tour but I'm beginning to remember that perhaps I didn't. I had yet to sample scotch. At this point I was beginning to think it was a good thing. There must have been a reason I didn't take that tour. I continued on. I went to a restaurant where my waiter, who looked like Luis Sojo of the NY Yankees, insisted that I try scotch on the house. He said I couldn't come to Scotland and not try scotch. Um, yes I could. But I couldn't insult him. And hey, how weird was it to hear faux-Luis Sojo speak with a cool Scottish accent? I kept seeing him with his Yankees pinstripes. Out came my scotch. I took a sniff. I almost died. Really I did. I was alone, no one to go to bat for me. I had to drink it. Ugh. I was polite. I smiled and thanked him. I pretended it was good. It was then that I realized not all was great in Scotland. 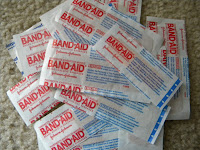 And now we were back to that night. All the bottles were lined up for tasting. No, I did not partake in the band-aid fest. I was the "pourer". All of the guys were pretty excited to be trying so many different scotches. There were 11 different labels lined up on the counter. I made sure after each pour to wipe my hands on the towel. I couldn't chance an accidental lick of the finger.

By the end of the night the guys were in a scotch induced haze of happiness. They had their favorites. I was still in awe. Mike is jealous of my Scotland story. He wants to go to Scotland and tour the factory and see all the different scotches up close in the homeland. I'm all in for a return trip. I'd love to hear those bagpipes, see the castles, tour the haunted underground vaults again and of course go shopping. But as for the scotch? I say buy a box of Johnson & Johnson and save yourself a couple hundred bucks and suck away. Same taste, cost less.