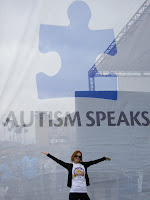 This was it - the day we had worked towards for the past 5 months. I was so excited that I didn't sleep much. I tried, really I did. I planned on getting up at 6:30am. Keep that in mind, I said planned. We were staying at my cousin's house. They live a few blocks away from an Arboretum. This means birds. Specifically peacocks. Lots of 'em. Which means natures alarm clock. I'm talking an early alarm clock.

I was already excited on my own, I didn't need any help from nature. Really, I didn't. At the sound of the first peacock I jumped out of bed. If they were up, that must mean it's at least 6am. I could do that. I could get up a little earlier and start getting ready. I was raring to go, go, go. Mike was still out cold. Weird since it wasn't that early but ok. I reached over to look at the clock and what?? It was not even 4am. How could that be? The birds were chirping away. Ugh. I lay back down. There was nothing I could do. Mike was down for the count. I knew he wasn't getting up early. He's not on my hyper train. He needs his sleep. I had to wait it out....

The time had come. Finally we were ready to go. I could barely contain my excitement. I was hopping around, bouncing in the car, moving to the music. Go, go, go. When we got there Mike had to hold my hand so I wouldn't run off, just bouncing down the street. I wanted to get to the Grand Club. We were so excited. Last year we took our oath - a few members of our team vowed that we would raise enough money to make sure that we got into the Grand Club. Ah, The Grand Club. Wait, I don't think that sounded good enough so let me try again. I mean, THE GRAND CLUB. This is for walkers who raise more than $1000. It was pretty cool. No, actually, it was freakin' fan-tab-ulous. 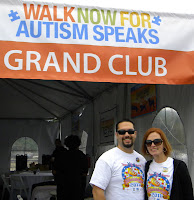 the thing - I raise money for charitable causes because I love to do it. Even if there was no Grand Club I would still strive to raise as much as I could. Now that I've made that clear......woohoo being under that tent was fantastic. It felt so good knowing that we worked hard and now we could sit down and enjoy our goodies. Continental breakfast, swag bags filled with lots of items to enjoy and the best part - talking with so many other people who work with Autism Speaks and hearing what they do to raise money or why they are involved in the cause. It always leaves us feeling more inspired so that we start planning our goals and what we can do to hopefully raise more money. 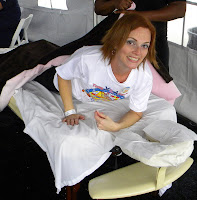 Oh wait, I'm sorry, did I leave out a part? Silly me. The massages. How could I leave out the massages? Ahhhh. After a walk well done we headed back behind the velvet ropes. Yes, it was time. I was in a pretty good mood. I let Mike go first. I know, I know. I'm too kind. Well, that and I think I was so hyper that if I actually got on that massage table I might squirm too much. I needed time to mellow out. This was definitely a nice way to cap off a great day. I hopped off the table and we met up with our team.

We had a great few months with so many amazing and supportive people. It's an incredible feeling to know that there are so many businesses and people that have wanted to help support us in our fundraising efforts. It's nice to know that there are still good people out there who follow through on their word. We are so grateful to everyone that supported us and as a result of their generosity our team was able to raise $13,105.00.

The final total on the day of walk is shown on the right. Volunteers from the GAP were on hand to hold up the numbers. Why the Gap you ask? Because the GAP was also a huge supporter. They matched funds. But wait! There's more! Even though the walk is over, fundraising is still ongoing and the numbers continue to rise. If you'd like to make a donation go to http://www.autismspeaks.org/ to find out how. Thank you!
Posted by Melissa K Bauer at 10:18 AM