This Belongs to Charlie 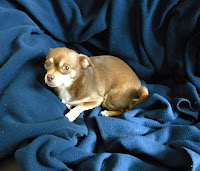 I should have known better, really I should have. When we first got Charlie we thought that because of his size everything would be okay. He won't take up much room. I mean come on, the little tyke is only 10 pounds. We even thought it would be nice to get him his own bed. You know, one of those cute little doggie beds. That was our first mistake.

Now that he has taken over the house and our Queen sized bed and the couch oh and let's not leave out the 6 foot love sac you can definitely say that we've learned that Charlie is the King of the Castle. Don't get me wrong, we wouldn't have it any other way. Just one look into those cute big brown eyes and you can't help but let him lay all over anything he wants. 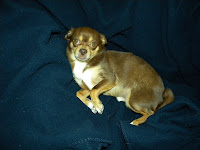 But it makes you wonder - how much room does a 10 pound dog really need? When we lay in bed at night and feel a little paw stretch out, pushing us over, is that really necessary? Someone was getting a little greedy here and no, this time it was not Mike. The other day it went too far. I like to have blankets stashed all over the house. I found that every time I needed a blanket Charlie happened to be tangled up in not one but two.

Something wasn't right with this picture. I knew my blanket supply was dwindling and I'll admit I was slacking on the laundry duties but did he need two at a time? What was going on here? First I had Mike and his pillows. Now I have Charlie and his blankets. I was surrounded. 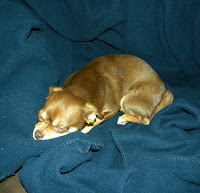 I finally decided to stop slacking on these blue blankets. They were in the wash zone for a while. I needed my own coverage and decided it was time. I couldn't wait to sit on the couch and relax. I took one out of the dryer, all nice and toasty. This was actually a king size blanket.

I put it on the couch and stepped away for just a minute, not even. I came back and this is what I found - a brown ball of fur completely engulfed in the warmth "pretending" to be asleep. That's right, pretending is what he was doing. It's almost as if he was stalking me, waiting for me to drag that blanket out of the dryer because that thing wasn't on that couch for even a minute when he shot over and staked his claim. Now I know and now you know. As long as you have a dog and a husband there's no such thing as "your" pillow and "your" blanket. Apparently they're all loaners. That's what I'm told.