When you live in an area for a while there are so many things to do that you don't. You take them all for granted. You think that you'll get to it eventually until one day you realize that you never did and now it's too late. I refuse to let that happen. It seems to appear that the end is in sight for our San Diego days. I can't tell you an exact date but I know that the end is near. With that in mind, we now pass signs advertising events with a new outlook. Instead of saying we'll have to check that out sometime and put it in the back of our mind we actually now check it out.

The new goal - go to all of the places that we have been saying we were going to go to for the past 8 years. Yes people, we're actually going to do it. And enjoy it. And pay the discount price for all of it. Thank you Entertainment Guide. And Groupon. And Living Social. And Buy With Me. And the Daily Save. If you're going to do it all you might as well look for some deals while you're at it. Doing it all can add up. And hey, if you're doing it all you might as well go all the way. Go big or go home. Sounds good in theory.

We begin our adventure at what was formerly known as the Quail Botanical Gardens. I like this name much better. I don't like when people decide to rename things. Old names are much better. Baseball Stadiums should take note. Quail Botanical Gardens had such a nice ring to it. Apparently the city felt left out and they had to get in on the action. The new name is the San Diego Botanical Gardens. Really? Because if you didn't know where you were before entering the gardens you just look down at your map and ah, relief, I'm in San Diego.

This place was a lot bigger than I thought it would be. Actually HUGE. We didn't leave enough time to get through the place and there was a bonus - Chocolate Festival. Well, I actually knew about that and this was the real reason I decided to check out the gardens on this particular day. I'm a smart cookie. Mike gets his garden and I get my chocolate. It's a win-win situation. After walking around in the forests of bamboo, we bumped into local boy scout troop 799 who were selling honey which was produced by their assistant scoutmaster, a beekeeper by trade. We're all about supporting the boy scouts so we bought a bottle of the sage honey. Beeelicious. 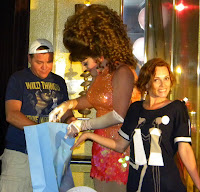 The next day it was time to get our bingo on. I'm not talking your grandma's bingo. This was Babette's bingo brunch - the best bingo I've ever had the pleasure of attending. Sure, the pressure is still on. It's all about across, diagonal, up and down. The stakes on high. Everyone wants to win, win, win. But this bingo is like no other - it's at our favorite place in downtown San Diego, Martini's Above Fourth in Hillcrest where the Martini's are absolutely delicious and the entertainment is hilarious.

At bingo you don't just come to win, you come for the food, the friends, the show and the fun. It's the total package. Of course winning makes it all the more fun but even if you don't get to yell BINGO you still enjoy the afternoon of non-stop laughter. But this day I was a winner. Yes, when I got that bingo I jumped out of my seat and made a beeline for the stage. I wasn't taking a chance. This was my time. That win was mine. I was so excited. I chose my ticket, saw my first prize and decided to go for the bag. Just like "Let's Make a Deal", I had my options. Blue bag or Pink Bag. I looked to my table. They all yelled Blue, blue, blue. I had to go with my people. I chose blue. Oh no a zoink! I got a zoink! A child's cheerleader outfit. Smile, pose for the camera. Ah, all in good fun. Besides, I do have a niece. No prizes ever go to waste.

After the fun of bingo, and all those martinis, we decided to walk around Hillcrest and do a little shopping. First stop was Babette Shwartz's shop. Chock full of gag gifts, t-shirts, cards and novelties. It's always a stop on the tour. We continued down the block and came upon the best little clothing store called Twirl. We only intended to peek inside for a minute or two. I think we were in here for over an hour. We literally put on a fashion show for the store. I don't know how it happened. The clothes are incredibly fun, fashionable, trendy and the best part.....affordable.

What a freakin' gem of a place this store is. A hidden gem. It's not a mass marketed place where you know a million other girls will be wearing the same shirt as you and yet it's so budget friendly you know you can buy a few items and not panic that you just blew your paycheck. I think I just convinced myself to go back for more clothes. Uh oh. Plus, if you spend a certain amount, you get a coupon for a free pedicure. You really can't go wrong. They get new styles in on a daily basis so it's always a good day to check this store out.

It was a fabulous weekend spent with great friends and some new memories were added to the mix. Although I think next time the guys should join that fashion show. That turquoise dress would have looked great on one of you. Maybe that see through pink top with the white hat. Come on, you guys have some great legs. Work it, work it.

*If you would like to visit any of the locations mentioned above check out the following websites and/or store locations: