Weekends in San Diego & a Detour in Temecula

There are so many things that I keep saying I am going to do. One of them is berry picking. More specifically the berry of straw. Every year I pass by the sign that says "Strawberry Picking here" and every year I keep saying I'm going to do that. Of course it doesn't happen. It also doesn't help that Mike hates strawberries and we all know that picking fruit by yourself is no fun.

We've gone blackberry picking before. Sure, that was great but again, we've done it and I wanted to go strawberry picking. It's literally right down the road from where I drop Mike off at work so I didn't even have the excuse that it was too far to go. What was I waiting for? I don't know. I have this bad habit of living in a place and saying that I will do things eventually and then never doing them and before I know it, it's too late. I didn't want that day to come. I knew the time was now.

That's my new outlook. Now. I can't say I will do something one day. What if that day never comes? Especially since I know I will most likely be moving. Oops. Cat's out of the bag. I have to take advantage of everything that I can while I have it in front of me and that included the berry fields. I put in a call. Well, I knew Mike wouldn't pick so I needed back up. Those aren't my perfectly manicured hands holding those perfect specimens to the right. Thanks Naomi.

We headed to the fields in Carlsbad to begin our adventure. It's not as easy as you'd think. It's hard to get those berries off the stem without bruising and there are rules to follow. You can't take the stems off. Not an easy task. But you can eat as many as you'd like. This was a rule I could abide by. I will admit, I have gone strawberry picking one other time but it was on Long Island in New York and it was years ago. I recall the berries being a little easier to get off the stems and the fields were more wide open but overall this was a lot of fun and definitely the best way to go to get your berries. Much juicier, fresher and better tasting than any berry you'll buy in the market. 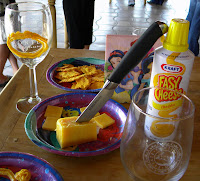 The weekend had us take a little detour out to wine country. That's right people it was time for us to get our wine and cheese on. Nothing but the best for us. Thanks to Kevin we had the finest in cheese. A little sharp cheddar and some cheese whiz. Nothing says "Day in Wine Country" like the cheese whiz. We were the envy of the all.

Every winery we went to, we laid out our fine delicacies in front of us for all to see. Crackers and chocolate supplied by Doug and Naomi added to our fine dining. People kept passing by, staring, drooling, hoping to be invited into our circle. We weren't exclusive. We were willing to share. We passed out a few cracker stix. We're a sharing bunch. 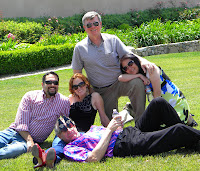 We began our journey at Falkner Winery. It was a successful stop. It kicked off our tour with a bang for it was there that Kevin found the magic glasses. The "wine bottle" glasses. What started out as a fun gag turned the day into a paparazzi filled photo frenzy. Every where we went, Kevin was surrounded by people asking for a picture. Either with him or of him, it didn't matter. As long as they had him and his glasses in the photo was all they cared about.

We moved on to South Coast Winery. At first we were overwhelmed. So many wines to choose from. What to do, what to do. But then, those glasses. Kevin was a hit. First one girl, then a crowd of girls. Who knew? I think he might take these glasses every where from now on. We had a great time here. The wine server was super friendly and I loved that they had a whole section on just sparkling wines. 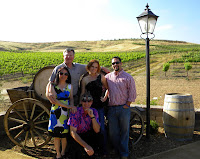 Next stop, Ponte. Mike and I are wine club members so we figured we would just pick up our shipment and have a quick tasting. But with our entourage there really isn't such a thing as quick. Plus, those glasses. I mean, they draw crowds. Really. I'm talking crowds. They didn't disappoint here either. We set up shop and got busy. Cheese, crackers, the whole spread. And the cameras. Can't forget those. The people were approaching from all around.

I honestly didn't think these glasses would get that much action. It was time to move on to our last winery, Europa Village. This was a new place. I'd been stalking it. Since I love Europe and it was supposed to be European style wines I figured it should be good. We headed over. The concept was cool - it's supposed to be a village - Italy, France and Spain. It will eventually be three different wineries on the property but at the moment they have one building open. There are 3 different tasting rooms with the themes. We chose to taste in France. Bet that surprises all of you, huh?

The wine servers here were very friendly too. This may come as a surprise to everyone - the glasses were a big hit here as well. The cameras were out in full force. From the beginning to the end those glasses made Kevin a star. It's no surprise that he's ready to go back for another day of wine tasting. Maybe next time we should all get some glasses. See how it feels to be famous. At least for a day.

If you'd like to visit any of the places I've mentioned above check out their websites:

http://www.europavillage.com/
Posted by Melissa K Bauer at 10:10 AM