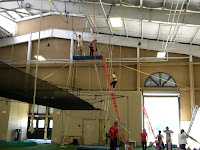 The day had finally arrived. My circus debut was here. I was going to be a trapeze artist. Well, sort of. Leave out the artist part. After months of seeing other people flying through the air, seeing ads online, in the paper, in magazines, practically everywhere, taunting me, teasing, I couldn't take it anymore. I'd had enough. It was my time to fly. What made the day even more special was the great deal I got through the website buywithme.com. What's better than a dream? A dream on sale!

I arrived at the Del Mar Fairgrounds where the Circus Fund is located. I was so excited. Our class was going to be full today. Eight people to a class. We were told to arrive early so I did. Apparently I was the only one that got the memo. I'm getting a little antsy when I see them. One, two, three. Oh sh*t. Four, five. Are you kidding me? Where's the hidden camera? This must be some sort of joke. Six, seven. Yup, that's the last of the little buggers. Kids. All of them. My class is filled with kids. It seems that the class today was a children's birthday party. And me. The lone adult. Whoopee! Things are looking up. Well, I guess they will be soon, huh?

I looked on the bright side. I'm bigger. I get to go first. All the time. Plus, a few kids got scared and bowed out. Ok, I'll admit, the kids actually weren't that bad after all. Shhh, don't tell anyone. Some were even kinda cute. I practically ran up the ladder for my first jump. I was pretty excited. It was just a basic "banana" jump. Jump, hang like a banana, let go, land. Of course, being the first jump and all, I was a little nervous but it was fan-tab-ulous. I couldn't wait for the next part - the hang and back flip. This was where it got tricky. You actually had to work it now.
Back up I went. 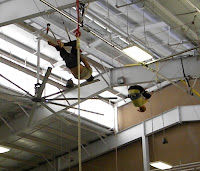 For anyone that is worried that they'll be too nervous - you are so busy concentrating on what you have to do that you don't have time to be nervous. You have to pay attention to everything. If you miss your cue, it's over and back down you go. I had the knees up and over the bar. Swinging the arms, got that. I got a little lost when it came to the back flip. Apparently I was over-thinking and acting too much like an athlete (so I was told). I was working up too much swing on the legs. Patience is what I need. Crap. They didn't realize I don't have much of that.

Back in line I went. I had to get this part down before I could move on to the next portion - the catch. But damn, now I had to get to the end of the line. Waiting for the kids was the hardest part. If it were up to me, I would have kept going over and over again. Sharing is still something I'm not a fan of. Whew, I took my second turn at the back-flip and got it. When it comes to athletics, I need to perfect it. Why can't I be like that with everything in life? Moving on to the catch.

This was by far the most fun of all three sections. Of course by this time the line was short. Most of the kids were scared away by this one. Why? Who knows but it was a huge benefit to me. Send up the guinea pig. That would be me. I flew up the ladder. I was raring to go. I grabbed the bar and off I went. Timing had to be perfect for this one. If you missed any of your cues, you would most likely miss the hands of your "catcher" and then you would have to jump down onto the net. Where's the fun in that? I made my catch. I'm feeling great. Then I get off the net and am told I should be faster with my "legs up" next time. Faster? Ugh. Do you know how hard it is to get those legs up on the bar by this point? But hey, I can't disappoint. I'm going up for round 2. 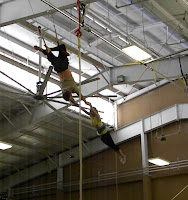 It was my final act of the day. I had to make it perfect. Be quicker. Get those legs up fast. I was tired, it had been almost 2 hours but I had to make it work. I jumped up, heard my cue, legs up, arms off the bar, reached out and caught. Whew! Throw back, landed on the net. Perfect. I'm told that this was much better, great job. Ahhh. I can relax. I'm liking this circus thing. For two solid hours I had not a care in the world. My mind was free of worry. All I was focused on was flying through the air on the trapeze, completing the tasks that I was given. My goal was accomplished. To have fun. Maybe joining the circus isn't such a bad thing after all.
*If you want information on how you can join the circus and live in the Southern California area, go to http://www.circusfund.org/.
Posted by Melissa K Bauer at 3:06 PM