I love my hair. There, I've said it. Now that I've gotten that out of the way I can continue. While I love my hair, I am not attached to my hair. I live in the moment. As in, I love my hair at this moment. What can I say, I get bored. With everything. Not many things are safe. I'm not one of those people who would rather lose a limb than cut their hair.

I've never understood that. I've seen women with hair that is so nasty, split ends on every strand, who refuse to take the scissors to their mane. I don't get it. What is this hair attachment? It's not like it won't grow back. I'm all for growing my hair. I'm also all for cutting it. It's something new, something different. Why be the same all the time? 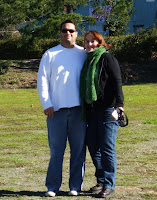 I have a hair pattern. I like to grow it out and then cut it off. I'll try different styles and when I get bored, which is inevitable, I'll ride it out. Once my hair has out grown the old 'do I'll let it grow for a while, see where it goes. The grow and chop. That's how I roll. I've never had a problem with this pattern. No one has ever gotten in the way. Not even my husband. He's a go-with-the-flow kind of guy. He likes my hair any way I have it. Long, short, bangs (it was an accident), no bangs, whatever.

I decided over the summer that it was time. The chop was coming. My mom was visiting and I made my announcement over dinner. I had a mutiny on my hands. It was a full blown hair mutiny. The tag team of Mom & Mike was in full force. They told me that they weren't ready. It wasn't time, I couldn't cut my hair. I couldn't stop laughing. I'd never been opposed before (well, besides Pop-Pop Gram but grandmothers NEVER want you to cut your hair). For the first time, I was being vetoed. Maybe I wasn't fully ready. I conceded. I just went for the trim.

That was months ago. This time I was ready. I looked at my hair. It was in need of a fix. I know it's before the holidays and technically I should wait until after but I'm feeling the itch. The chop is coming. I made my appointment and I started my pitch. I told Mike that this was it. The time had come. Nah, it's just not time. Mike apparently was still not ready.

Now I'm confused. He's never been attached. He told me it's only because it's not time. With a line like that I could only laugh. I ended up only getting a few inches cut. Went for the "healthy" look. But I can't hold out much longer. There's only so much holding off I can do for the tag team. I called the other half of the duo on the way home. Told her I'd cut off my hair. She didn't think I was funny.

I asked Mike what was up with him and my mom and their new obsession with my hair. He smiled. The scary part isn't the hair obsession. It's the tag team. I'm not liking this two against one thing they've got going. It seems to happen quite a lot. Started with the little things. I thought it was cute. If only I would have know what it was going to turn into....hair mutiny.
Posted by Melissa K Bauer at 10:19 AM