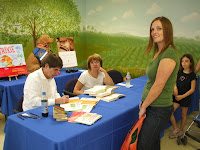 I am a professional dreamer. Always have been. My theory has always been that things have to happen to someone and I'm someone so why shouldn't they happen to me? I've never put a time frame on any of these dreams but I've always known at some point in my life that they would happen.

Sure, people are always going to try and stomp on a dream or two but I say never listen. If you listen to the naysayers you risk not believing that your dream can come true and take it from me - you never know what can happen. Dreams don't have to be over the top. They can be. Simple or outrageous. Dreams are what you want them to be. They are whatever each person believes in.

Let's start with a good one. Dean Koontz. I've mentioned him before. He's my book God. The author I've followed since childhood. Which brings me to dream #1 - to meet Dean Koontz. Of course this seemed like an impossibility. I lived in New York, he lived in California. He doesn't do much press. I didn't care.

Like I said, I'm a dreamer. I believe dreams come true. I was 10. Someday, I knew it would happen. Which brings me to dream # 2 - to live in California. Yes, I know, I want to live in many places but California was on my list. At 15, I'd read so many Koontz books and I knew I had to get to the West Coast. So many people told me it would never happen. Do you know what's worse than people telling me no? People stepping on my dreams and telling me no. I don't think so. 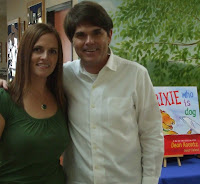 The dreams were a little bit out of order but along they came. I eventually did move to California. Dream # 2 came off the list. I knew I would do it. I knew I was closer to dream # 1 but I didn't realize how close until I drove home one day. Just 3 miles from our house I saw a sign. No, literally, I saw a sign. "Canine Companions - The Dean, Gerda & Trixie Koontz Campus".

Oh My God. I could barely contain my excitement. And then it happened. A notice in the local Starbucks announcing that rare book signing at the campus. Something I had waited my whole life for was finally going to happen. It was an unbelievable moment, one we captured on video and film. Dream # 1 finally came true.

I have so many dreams that have yet to be realized but I know they can come true. I think it's sad when people don't think dreams are attainable. It's like there isn't a point to reaching for the stars anymore and without dreams what do we have? Walt Disney had the fairy Godmother say it best - a dream is a wish your heart makes when you're fast asleep. Sometimes it does suck to wake up though, you don't have any singing mice who will iron your clothes.
Posted by Melissa K Bauer at 3:47 PM