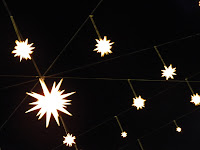 When my friend called me and asked if I wanted to go early Black Friday shopping at the Carlsbad Outlet Mall on Thanksgiving Night at midnight I said sure, why the hell not. Some people might think this is crazy. Me, I'm not one of those people. As you might see by now, I'm pretty much up for anything. I view it as an adventure.

There are those skeptical scrooges that bark out a bah humbug and say the holidays are no fun. I say shut the hell up. Don't rain on my parade. I've heard people complain about the early shopping, saying things like you should be spending time with your families. I don't know about you but at 3am I am not spending time with my family. I am generally sleeping. Sleep can be overrated. There is plenty of opportunity to sleep. Like when I'm dead. I'll catch up on all the sleep I can at that time. At this time, I'll be at the mall bonding with my friend. 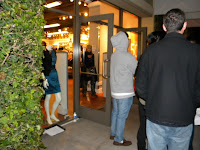 Our plan of attack was to stop at Starbucks for a little pick me up and get on the move. Apparently everyone else was in on the plan. That was the longest line at the mall. We had to abort mission. Parking. This would most likely be the next problem but shopping Gods were on our side. Well, a lone security guard from across the street was. We did some covert ops and got a "spot". Mission accomplished. We left the warmth of our car and strolled out into the lovely Southern California weather.....high 30's I believe. Take that East Coast!

We headed to Banana Republic first. It's always a must stop on the Outlet Tour. There was a small line forming. To avoid a packed store, all retailers were only letting in a certain amount of people at a time. It was just like being back in college and waiting in line at the clubs. Only this time at the end of the night after spending my money I had something to show for it. One dress and one sweater later and we were on our way. Next stop - the Gap. As you can see from exhibit A below, this place was a zoo. I was highly amused. I wasn't buying anything but I was here for pure entertainment value. This line alone says it all. People weren't paying attention to what was going on around them. They were just walking around, bumping, pushing blindly, grabbing. I loved it. 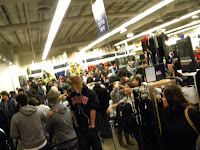 Which is why I felt the need to take this picture. Which led to me getting in trouble. Seriously. Apparently you are not allowed to take pictures in stores. Where is this sign posted you ask? It's not. Anywhere. But that didn't stop the sales girl from telling us that what we were doing was illegal. Whatever Gap. It's not like we were going to broadcast to everyone where we were, Gap. Until that moment anyway. Good thing I wasn't a secret shopper. 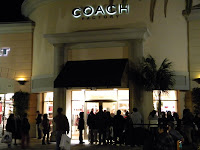 We couldn't let our close brush with the law put a damper on the night. We had an even bigger mission. The Promised Land. We had to get to the Promised Land. Or what so many other people refer to it as - Coach. My friend's number one goal had been to get to Coach.

No problem. Or so we thought until we got there and tried to find the end of the line. There wasn't one. Really. The line was actually longer than Starbucks. Who would've thought that was even possible? We were told the wait was more than an hour. Sadly, we had to walk away. For now. We would make it to the promised land. The night was not over. 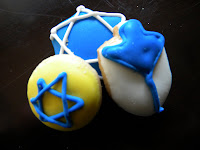 At this point there was a rumble in the Bronx. Well, ok, in my belly. It was almost 3 am and I was hungry. I needed food. Something to keep me on my journey. It was time for a trip to Harry and David. I can always count on them for a little pick me up. A free sampling of snacks everywhere.

What?? No snacks tonight? I ran through the store like a crazed animal. I needed a snack. That's when I saw them. These adorable little Hanukkah cookies. They were the perfect size. Bite size. It meant you could eat them all. These were dee-lish-ious. Vanilla. Yum. Mazel tov! We could now brave the final leg of our journey.

Yes, we did make it back to Coach. After 3:30am the line was gone and my friend was able to snag some fabulous bags. I almost got knocked over by a crazed teenager but it was all part of the fun. I couldn't stop laughing at the insane masses and I was glad to be a part of it all. Most of all I had a great time with my friend doing something we've never done before. We bonded over a new shopping experience and we created a lasting memory. But wait! It didn't end there. It was now poinsettia time.

On to Home Depot. The last leg of our journey. As luck would have it the Home Depot is right 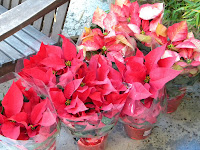 down the block from my house. Perfect. We grabbed our share of the 10 per person quota and completed the final leg of our excursion. Aahh. It was a fabulous night. And morning. Six o'clock was our final time in.

I know this isn't for everyone. To those who don't enjoy, we don't ask you to. Go hang with the Grinch. Just leave us merry makers alone. To those who do enjoy, go crazy, have fun, be merry. To my friend I say same time next year?