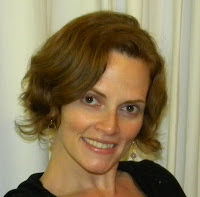 Well, I did it. I didn't mean to, it just happened. Sort of like an accident. Yes, an accident. That's my story and I'm sticking to it. I knew it was time. I was ready. Kind of. Maybe not as prepared for exactly what went down. I thought I was. I decided I had had enough of the long. The chop. I think I can go for the chop. I told Mike it was time. I grabbed some magazines and began searching for a style that looked good.

There were so many nice ones but there wasn't one that just reached out to me. Until I turned the page. This one spoke to me. Sure, I think I can go for this one. I showed it to Mike. He loved. I was kind of joking. Kind of. I actually DID like the cut. A lot. But it was short. Very short. I'd never actually gone that short before. I didn't know if I could do it. I marked my page and kept looking. It was a contender for sure. But I continued my search...... 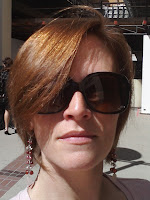 Everyone knows that once you decide to cut your hair, this is when the hair Gods shine down on you. Once I made that call, that fateful appointment, my hair had never looked better. Really? I'd been living on ponytails for weeks. Now all of a sudden those golden auburn tresses were flowing down my shoulders. Damn. Now what do I do? Cut it off? Trim it? I was torn. The day was getting closer. I didn't tell anyone was going on. Since I didn't know what I was doing I figured there was no sense in creating a panic. Besides, someone might try to talk me out of what I was about to do. What was I about to do? I didn't know myself so I kept quiet.

The day arrived and I walked into the salon. My Hair Guru was waiting. He asked me what I wanted. I still didn't have a clue. I launched into my explanation. I was ready to cut - not all, but some. I could go above the shoulders but nothing above the chin. I was feeling good, not DARINGLY BRAVE. Hair Guru said I could stay long or go short, either would be great. Damn. This is not helping the situation. What to do, what to do.

Mike's instructions were this - short or just a trim. I relayed this information. Go figure, Hair Guru agreed with Mike. Hhhhmm, if I didn't know better I would've thought Mike had called H.G. ahead of time to discuss this strategy. I felt like they were in on this together. How could this be? I had to make a decision. Okay, I'll go with the short. But remember, above the shoulder, below the chin. Have I mentioned that I was not daringly brave? I just wanted to point that out again.

"I like you better with short hair", says Hair Guru. Whoa. That's short. Here's the weird thing. How did he get in my head? My hair cut is that picture in the magazine. I never said a word. Never showed one photo. To anyone except Mike. It's almost the same concept. How did he do that? I walked out a bit in shock. Don't get me wrong - Hair Guru did a great job, he always does but I'm still adjusting to my new look.

Mike is all aboard the short train. He loves the new 'do. He can't stop looking. I know some people are finding it hard to adjust - like my parents. My mom would like to know what I did with "her" red hair. Understandable. It's a big change. But I personally would like compliments like this to keep coming in: "hot redheaded chick". Also, to the woman who stopped me outside of my car to say "I love your hair" - your timing was perfect, thank you. Long is boring. Short is exciting. Change is good. I'm all for change. Although my mom still needs time. She asked if I saved my hair, you know, just in case I wanted to get extensions put back in. She was kidding. I think.
Posted by Melissa K Bauer at 8:56 AM