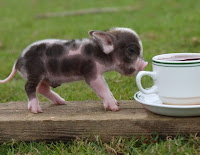 A few years ago I told Mike that I wanted a mini pig for Christmas. I was serious. I don't think he believed me. Which is why I didn't get my little pig. Well, technically one might say it wasn't on my list. This is partially my fault. I've never been a fan of the Christmas list. I have a hard time deciding what to put on there. It's not really my style to make one. Until I met Mike, I don't think I'd ever made a Christmas list. I didn't see a point. You put things on there that you hope to get and then you rush to look under the tree only to find that your list remained intact. Yup, better to just not have a list. Now you see why. It's a set up. I believe in the spoken word. I say what I want. Quite often. People should take notes. I do. I listen, which is why when it comes time to giving gifts I generally know what a person wants. Back to my pig. I mentioned the little tyke a few times. But alas, little Hamlet wasn't meant to be....

But wait! What's that noise? That snorting? Did Mike get me my little piggy after all? Did he sneak in a little buddy for Charlie? I followed the sounds of piggy all the way to the bedroom. It was coming from under the covers. Snort, snort, snort. A small, little mound was wiggling between the pillows. I peeled back the comforter and found.....what the.....Charlie? There's something not quite right here. How did my little brown ball of fur morph into my little piglet? And what a little piglet he is. It's amazing what this little guy has turned into. Apparently, when he heard my Christmas wish, he decided he would give it to me. Day by day, our little Charlie has been turning into a little pig. We used to be so concerned about our little munchkin, he barely touched his food. Now he thinks everything is being prepared for him. 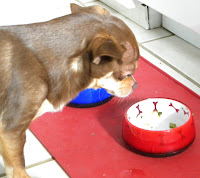 Ironically, the little ham has even taught himself some tricks. I'm not a believer in making my kid perform for his food. I think it's mean but Porky is so excited when food is coming out that he can't contain himself. He jumps, he twirls, he does double Axels. Ok maybe that last part was a slight exaggeration but he's pretty excited to eat. I just don't understand where it all came from. While he's snorting his food in, he's watching to see what we're making next. This is really one content little guy. He has no clue that I'm still getting that mini pig someday. He may be my little piglet for now, but he'll have to share the limelight one day. You hear that Mike? Maybe I didn't mean it about the baby elephant or the little wombat but this time I'm serious.
Posted by Melissa K Bauer at 10:37 AM