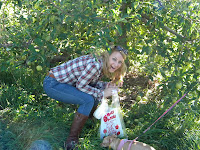 It was great to be back in NYC during the best season - Autumn. It's my favorite time of the year which is why living in San Diego is never my ideal during the fall. I was so excited to be going back to New York and of course I couldn't leave without the little furry guy so Charlie got his suitcase packed & to the big city he came. And yes, he packed his own suitcase. Charlie is a dog of many talents.
Our first adventure was apple picking. What's a fall adventure without a little apple picking? It was a first for many - Charlie and Liz. Not all behaved. This time it wasn't Liz. It started out great. The weather was perfect. Blue skies, not too warm, not too cold - just right. We all hopped in the mom mobile and headed to Warwick, NY - otherwise known as "upstate". Hey, anything north of the Bronx is upstate. 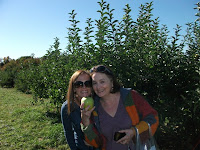 Charlie had his friends too - Mia and Ziggy were along for the adventure as well. We arrived, parked and started to pick. It was great - Mags, a.k.a. "mom", and Liz got in the trees and started to pick. Empires, Cortlands, Macs, they put them in the bag. None of those Red Delicious though. Blech. We were having fun, walking and picking, taking pictures. That's when it happened. I was only in the tree for a second. I guess that's all it takes. A few barks, a leash falls, Charlie flies through the air. You just take your eyes off the kids for one second and the trouble they get into. I don't think I've ever moved so fast. I flew through the air after the little tyke. Thankfully the other dog owners were understanding. No harm done. Just a bark and run. 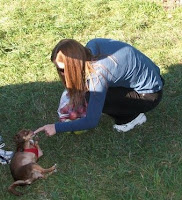 Charlie had a time out in the car while we resumed picking. I think all that fresh air made him elated. Who can blame him? He just wanted to run free, run wild, be one with the farm. Besides, he had new friends. Or partners in crime depending on how you looked at it. I guess I could understand - I let him out of the car.
It seems that Charlie has found himself in NY. He became a fan of running around in the grass, rolling in the dirt, chasing squirrels & birds. This is the same dog that tiptoes through the grass at home because he doesn't like to walk in it. Who would've thought. Charlie is a New Yorker in disguise. I guess I know where his vote is on where to move.
Posted by Melissa K Bauer at 12:38 PM