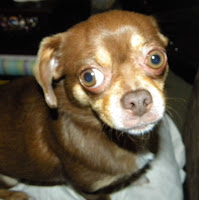 Most people have dogs that bark. Many people have dogs that yelp or yap. There are even those unlucky few that have dogs who whine. Thankfully we are not these people as this is incredibly annoying. We always bragged about how quiet our little Charlie is. Doesn't make a sound. Sure, the occasional bark may come out. He is after all a four-legged individual, it's to be expected but we don't encourage it.

However, what we have recently discovered is something that came as quite a shock. Yes, it is highly amusing and we weren't quite sure what to make of it but once we got over our laughter we realized just how unique our little man is. Charlie, our little 10 pound brown fur ball, is a screamer.

We knew Charlie was a special little tyke when he started playing tag and hide-n-seek with us. Just like our nephews. He loves to chase us into a room, wait for us to notice him, then run and hide. He'll then chase us back, wait until we hide and then search through the house until he finds us. It's hysterical to watch him get scared when he doesn't notice Mike sneak up on him. He'll get scared, jump and either run through the house so fast or fall to the floor. Usually. This has always been the routine. Until the other night.

It was business as usual. Charlie was waiting for Mike to get him. The game of choice was Tag. Mike was "it". I was just a bystander. Charlie was running through the house. Apparently he didn't realize how close behind Mike was because when Mike reached out to touch his paw.......AAAAAAHHHHH. Mike and I both froze. Charlie ran. Mike began his defense. He said he barely touched him. That's when we knew. He just scared the scream out of Charlie.

Now I've seen a lot of things with dogs. My beloved first dog TeePee could unwrap Peanut Butter cups and not rip even a corner of the wrapper - that's talent. I've seen dogs open doors, hide things, cuddle with stuffed animals, the list is long but I've never heard of a dog that gets so scared that it screams. I actually don't know who I was more amazed by - Mike or Charlie. Mike loves to scare people and the fact that he actually pulled a scream out of our dog is pretty impressive but the fact that Charlie actually screamed....that tops them all.

I think Charlie tried to get me back the other day. I came home and as I walked through the door I didn't see him on his usual spot. I called to him and when I looked down he actually did it again - he screamed and jumped. I couldn't believe it - twice in one week. What the hell? For the record it worked. He scared me. Now it's my turn for retaliation. He'd better watch his back.
Posted by Melissa K Bauer at 9:16 AM