Shark sighting at the vineyard 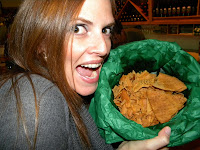 We are members at Ponte Winery in Temecula, CA. It's a beautiful place. We feel it's one of the best wineries in the region. This may have something to do with the fact that it's the only winery that gives out snacks when you wine taste but you'll learn that this is a very important factor. Snacks are key when wine tasting. Empty stomachs are dangerous. Very dangerous.

Ponte doesn't just have snacks, they have pita chips. We're talking high end snacks. These things are slammin' (translation - delicious). It's very important to position yourself in front of a basket of these bad boys when you arrive. Most people might find a spot by the wine list. That's second in importance. Trust me. It's all about the pita chips. You'll start to realize that as the wine hits your empty belly.

But on this occasion, it's a Friday night, we are at Ponte for one of their special occasion shopping nights. Ponte has these every so often throughout the year and as the holidays approach they will have them every Friday. This was our first so we were pretty excited. It's a members only affair but guests and friends are invited. We brought our crew and headed to wine country. Even though we got there early it was already packed. Ponte is the place that is always packed. Our chauffeur, ok, Mike, dropped us at the door and parked. All the wine was free tonight, as were the hors d'oeuvres and any purchases were 30% off. Free food and drink. What could be better. 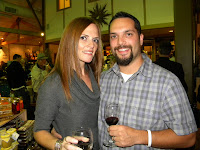 We hit the bar and searched for food. No food. Hhhmm. I swear the invite said food. I'm feeling a little guilty. I told my people food. Mike leaves on a search and rescue mission. We head back to the bar. We then notice that there's a crowd at the side exit. It almost looked like a feeding frenzy. It was like someone threw food in the water and the sharks were all gathering to attack. Hey, wait a minute, food....sharks.....whoa.

Mike came running over. Apparently there was food. As soon as it came out of the kitchen and made its way inside, those sharks pounced on the servers. They never got past the door. Those greedy bastards! It was time for a new game plan. We headed outside. Closer to the kitchen. We'd stand outside the chum circle and head off the sharks before food even got to them.

We all stood around when we saw it coming. A white plate held high in the air. The food was on it's way. We all reached out and grabbed. VICTORY! A chicken kabob. Aaahhhh. This game is getting good. Who knew we could outwit the sharks. We waited for another white plate to make its way down the path. We got excited. What tasty morsel would we get this time? But wait. Holy sh*t. What the hell....the sharks....they're coming.

I've never seen them move so fast. They freakin' ran down the path. Literally. They ran down the path. They just attacked the server. She didn't even see it coming. She barely made it out of the kitchen. Didn't they get enough? It always amazes me. The same people had been hogging the food all night and they were still making a grab for the food. Would they ever stop?

We held our ground and our positions for the rest of the night. We eventually did get more food. It was all delicious and yes, we let the servers move along and pass out food to other people. I've seen people get crazy with their wine but when it comes to the food, that's an area you just done mess with. Sharks, in and out of the water, are definitely the most dangerous creatures to deal with. They'll take you down to get what they want. I know if I hadn't moved out of the way of that mini taco tray, I might not have made it out that night.
Posted by Melissa K Bauer at 9:08 AM