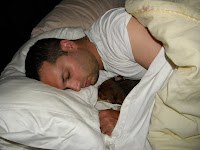 It doesn't help that I'm a light sleeper. A leaf dropping will wake me up. We even sleep with a fan and that sound doesn't mask anything to keep me under. Temperature is another thing. I need cold. Every night, I don't exaggerate, I'm talking every night, I wake up - hot - open the sliding door, change my pajamas and hop back into bed. 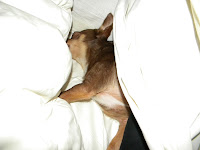 Back to last night. I kept having this strange dream. Mike had his arm wrapped around me and for some strange reason he kept shaking me awake. It kept happening over and over again. It seemed so real. It felt like it was really happening. Um, because it was. What the hell? Like I needed any help staying awake? He didn't do it just once. Not twice. This was the third time. I finally shoved him off and growled at him to get off me. He rolled over.

I thought it would end there. Nope. The shaking continued. This time I shook him, told him to stop. He was still half asleep and said he wasn't doing anything. Another involuntary shake. I told him again to stop. Here's the clincher.....he said it wasn't him, it was Charlie. He blamed the dog. Little Charlie was shaking the whole bed. And me. Charlie, who's at my feet and sound asleep, moving not a eyelash. I tried not to laugh. I was tired and grumpy but this was amusing.

I reminded Mike this morning of his earthquake activities. He still says it's Charlie. I can only laugh. I told him that I was a witness. I saw his hand, saw the shake in action. He insists that it was not him. It was Charlie and that's the story he's sticking to. This is why people get dogs. There's always someone to place the blame on.

He may be joking today, which is still debatable, but he was serious last night. When I told him that I was shaken awake he still went with it was Charlie and he meant it. He even insisted that he could feel him moving behind him although the little tyke was already at my feet. If only Charlie knew.
Posted by Melissa K Bauer at 9:48 AM